After upgrading your CM12 Primary site(s) to Windows Server 2012 R2, you may experience the following issues.

1.  You may not be able to access the console after the upgrade.  Check SMS Admins permission to the Primary site's WMI's root/SMS and root/SMS/Site_XXX.

SMS Admins group should have the following:

2.  Your MPs may experience issues moving files to its Primary site’s inbox folders after upgrading your Primary site to Server12 R2.   Overtime, if this is unnoticed, you would see your clients become inactive in the console.   You may see similar errors below in your MPFDM.log. 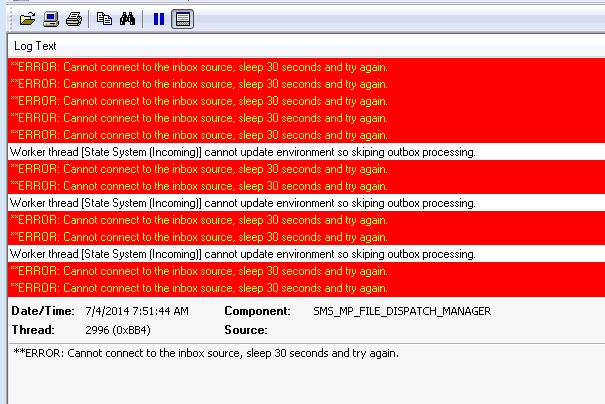 The only fix we have found so far that’s effective is to add the MPs in local\admins group of that Primary site that’s been upgraded.

Ever get tired of having to login remotely to DRACs and clearing the logs that way?   Here's a quick POSH for doing the same, but saves a lot of time.  Gotta love invoke-command :).   I suppose you could use PSEXEC too, but that's so 80s. :)

It is generally recommended to use shared SUSDB In your CM12 environment when you have multiple SUPs (Software Update Points) in a single primary site. Thus, have you ever had the need to switch from using SUPs with their own SUPDBs to shared SUPDB?   We did this simply to avoid the clients in failed state for long periods and to avoid that network cost.   Below is the script that I put together to switch from using non-shared SUPDB to shared SUPDB on our SUPs>

This script pretty much follows the general guideline of setting up your SUPs with shared SUPDB.   However, since we had already had it set in place where our SUPs were already using their own SUPDBs, so this will uninstall WSUS off your existing SUP or remove the role (windows feature) so that it can reset which DB it’s pointing to.   Then it follows it up with post configuration to put things back, and to where your SUPs are pointing to that single or common shared WSUS Database.

Quick breakdown of what each above does:

Lastly, this creates a log in the same folder you run this script under. $scriptname.log.

Again, use this at your own risk! But I hope it helps! J

Ever used ADRs (Automatic Deployment Rules) functionality in CM12?  Use it!  Granted, the search engine in there could use some work, but it's probably the best feature that was added in CM12!   I have to give my buddy Mason credit for this, for he has a lot to do with this addition :).

Anyway, we leverage ADRs in our environment for simply downloading the Monthly patches. Then we just turn around and add these downloaded patches to our Monthly patching groups with a deployment set to it. Well ok, we’ve automated the monthly downloads, now I kind of wanted to automate the group membership addition step here, for managing and patching our own servers. Well, how do we do that without having to recreate the patch deployment to our servers or kicking off the patch installs on our servers right away and impacting them?   Granted we have maintenance windows set for them, but we still wanted to tightly control this process and set the deployment deadline time appropriately in the future. So the answer is, we set the Update deployment to our Pilot collection first (to avoid impact), then add the newly downloaded patches from the ADRs to our group. Then modify the existing deployment’s deadline time later when pilot servers are validated.

So the POSH script below is what I had put together for this process.   So after the ADRs are done downloading, intent is to run this script and here’s what it does:

NOTE: You can change that Pilot collection to an Empty collection, for added safety measures.  And this also ensures that itanium updates are not added. For every now and then, those clowns get added in our group somehow. So this should avoid that. Oh, this would also go hand in hand with my other script/posting “Posh to remove expired and/or superseded updates from a CM12 Software Update Group”.

For the longest time, i couldn't find a good way to quickly and easily import a machine in CM12 for imaging along with necessary OSD variables to properly image our servers/workstations.  Now that we have CM12 R2, a new cmdlet "New-CMDeviceVariable" is put to use!  Here's a POSH i put together for importing new machine(s) in CM12 along with OSD variables.   It reads the .CSV file you provide (will be prompted for the path and name for it) and import the machines that are in that file, line by line.  This script also detects which domain you're in so you can set certain variables for let's say working you're in Lab or in your Production environment.   Just crack this posh open and change necessary variables in there to match your settings.   Below is the script, along with a sample .csv with required formats.