Written by Sherry Kissinger on 15 January 2016.

This is an update to this older blog: http://mnscug.org/blogs/sherry-kissinger/422-dot-net-frameworks-mof-edit

Nash Pherson, Enterprise Client Management MVP, pointed out that for versions 4.5x and higher Microsoft is recommending using the dword registry key called "release" to better pinpoint what version of .net is installed. Because "buildNumber" in the registry will say something like "4.5.51209"--but what it MEANS is that's version 4.5.2 (don't ask me why, I don't get it either).

Unfortunately, "Release" also isn't in nice, plain English. I couldn't find anything "easy" to make using BuildNumber any more or less useful than using "Release" number. But if you want to do exactly what Microsoft tells you to use, attached are updated mof edits for reporting on .net versions. The only thing added to this is "release"; which is only applicable to .net 4.5 and higher (well, up to 4.6.1 as far as I can tell; maybe it'll still be there in newer versions as those are released, but for now, that's all I can see)

Once configuration.mof is edited, you take the attached "to-be-imported-dot-net.mof" and in your CM console, Administration, Client Settings, right-click on "Default Client Settings", Properties, Hardware Inventory, "Set Classes..." then Import that to-be-imported-dot-net.mof file. If you already have one from previously, not to worry. It'll just accept the new one and modify your tables and views. Just monitor your dataldr.log to confirm all is well.
Then, of course, it's the typical waiting that one does in ConfigMgr. Just wait a while; how long depends upon how often you have hardware inventory configured to run; the # of clients you have, and other factors unique to your environment. But in a couple hours or by the next day, try running one of the reports in the attached .zip file.

Regardless of whether you have the "old" DotNetFrameworks mof edit (which doesn't have release) or are using this new one, attached in the .zip file are also some sample reports. With versions of .net 4.0-4.5.1 no longer under support, your organization may be under hightened awareness of finding and upgrading anyone with those older versions to the supported versions. For example, below is what a report might look like, using 2 of the SQL queries attached. The top one is the results of the 'SQLtoCountDotNetVersions', and bottom one would be the 'SQLToShowVersionsInYourDatabase' -- what values you have in your database will vary from company to company. 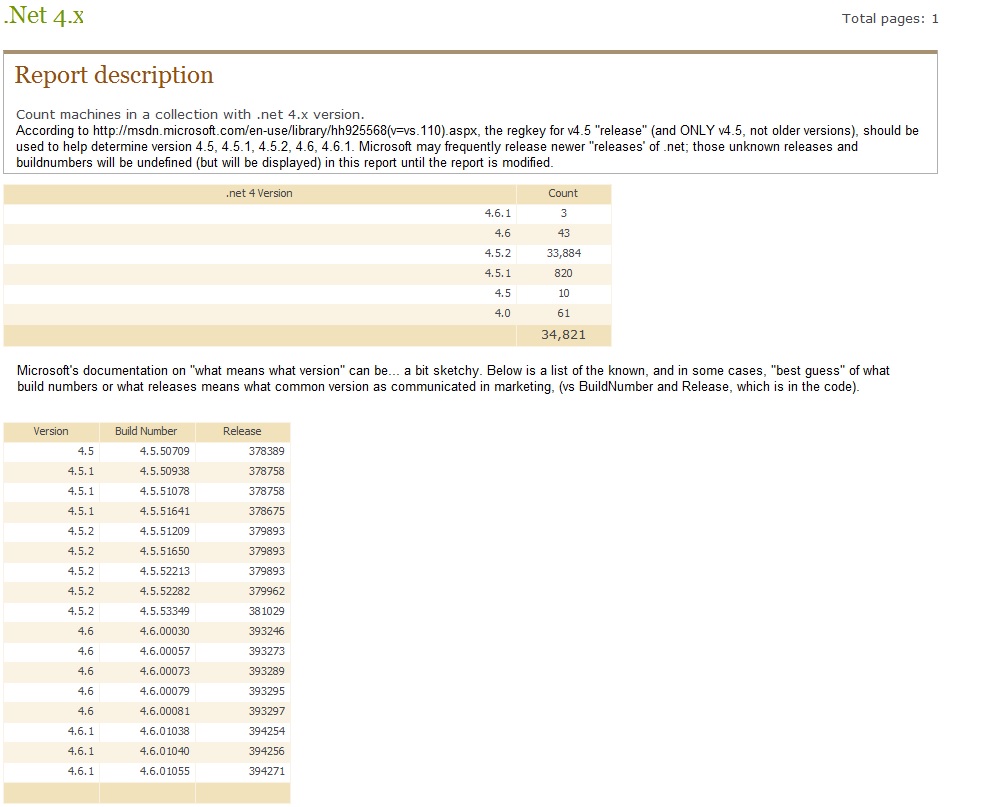 Geek notes: the "how to tell what .net is installed", came from two different Microsoft articles.
As I write this blog, this covers from .net 1.0 through .net 4.6.1
For V1-4: http://social.technet.microsoft.com/wiki/contents/articles/15601.how-to-determine-the-net-framework-installed-versions.aspx
For v4-4.61: https://msdn.microsoft.com/en-us/library/hh925568(v=vs.110).aspx