If you're familiar with the "DotNetFrameworks" mof edits, it's similar to that type of MOF edit.  --> attached <--, are what you would add to the bottom of your configuration.mof file in <installed location>\inboxes\clifiles.src\hinv, and the snippet you would import into your "Default Client Settings", hardware inventory, and then enable, or create a custom client agent setting to enable it only to a specific collection of machines.

Using a sql query like this, you can then pull out the "highest" Edition.

which could help you make a report like that could look like this. Computer names have been changed, but note that Computer3 and Computer5 have two versions of Visual Studio, and then their editions: 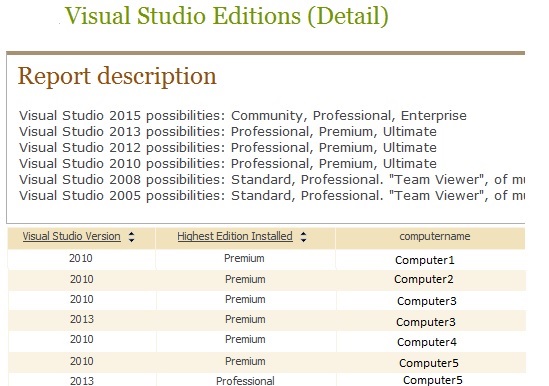 Sources for where I got these regkeys: