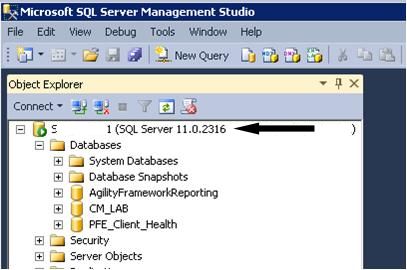 Last night I upgraded my CM07 lab to SQL 2012. The supported method from Microsoft is to install CM07 on SQL 2008 (or R2) and then run the SQL12 in-place upgrade over it. I think part of the reasoning behind that over a fresh install is that the prereq check would likely fail if it saw SQL12.

After running the upgrade job in my CM12 lab (yes that's not supported and it broke a few things), I found that this upgrade felt a lot like the old SQL 2005 to 2008 upgrade; lots of old stuff was left behind. So I thought I'd test what I did for that case here.

The idea is to uninstall the old SQL and install the new so that all the barnacle isn't left behind (old Visual Studio apps, old SQL Mgmt Studio apps, etc.). And doing that is a bit tricky, but it worked. What I did was:

Using SQL Mgmt Studio, detach all databases (we had a couple other than the CM one), and I also selected the update statics box as an option for the detach.

Install SQL12 (DB engine, replication - we replicate our MPs so we need that, SQL client tools).

I noticed that SQL12 doesn't want to run as local system and not knowing if thie new default of NT System would work, I selected System instead (had to browse for it). Did the same for the agent too.

Attached the databases and rebooted.

Enabled the services I disabled and ran a site reset checking the SQL box.

Tested things out and it's all working fine.